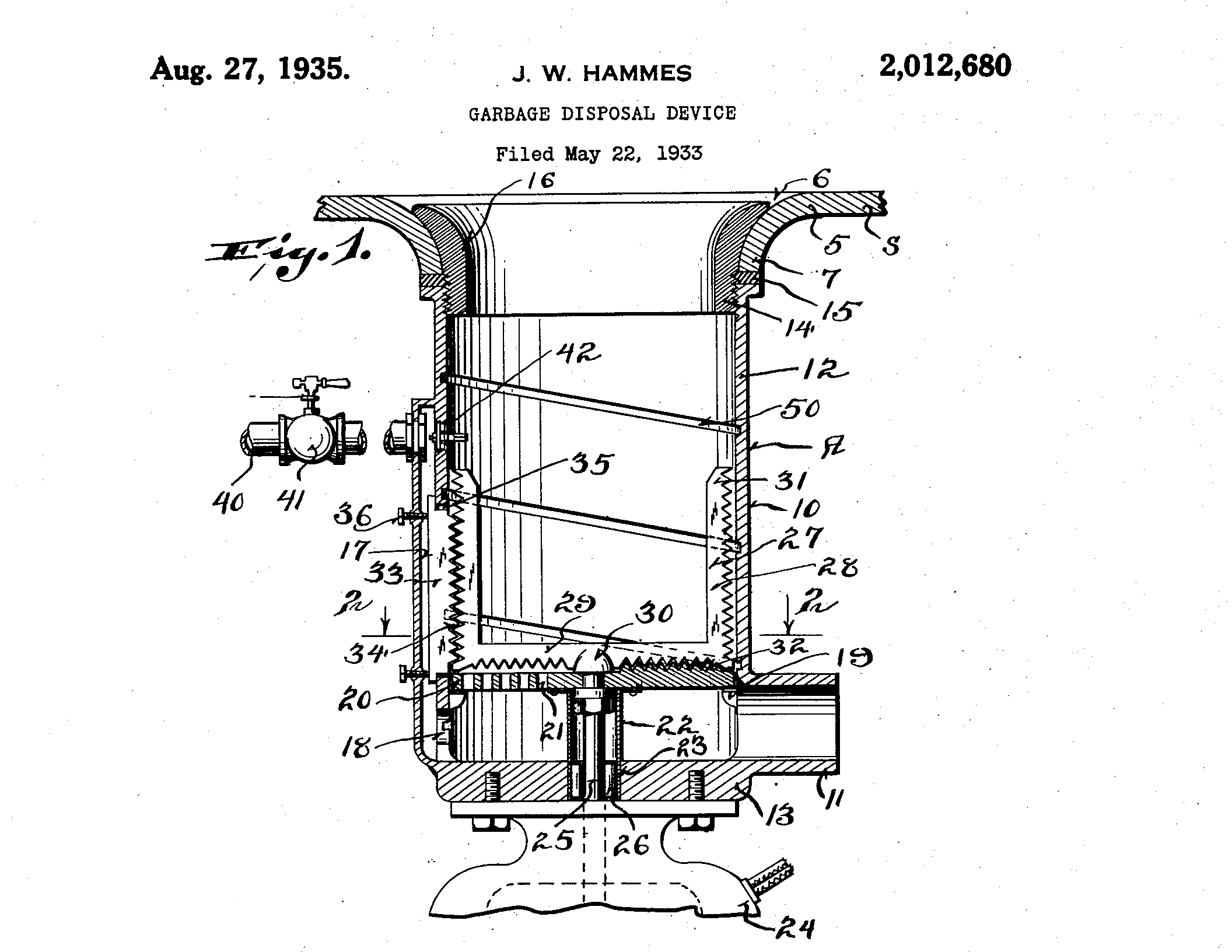 The History of the Garbage Disposal

Garbage disposals today are robust, bladed machines that allow us to quickly dispose of food waste that would otherwise sit to rot in the garbage can. These impressive kitchen gadgets are so popular, they’re installed in about half of all U.S. homes. For many home chefs, installing a powerful garbage disposal is an important key to having a perfectly outfitted kitchen. So, who do we have to thank for the invention of the garbage disposal?

Who invented the garbage disposal?

One night in 1927, a 32-year-old architect named John W. Hammes was watching his wife clean up after dinner in Racine, Wisconsin. Dismayed by the thought of hauling smelly garbage to the curb later, Hammes went straight to his basement workshop to design a solution. That night, he invented the first garbage disposal – a small, motorized grinder to pulverize food waste so that it can be washed down the kitchen sink.

Hammes didn’t stop there. He kept working to improve his device over the course of six years and sought a patent for it in 1933. By 1935, the patent for the garbage disposal was issued. Hammes started his own company to sell the food waste disposal systems and named it the In-Sink-Erator Manufacturing Company. That company name may sound familiar to you, because InSinkErator garbage disposals are still being sold today and top the lists of best garbage disposals each year. InSinkErator produces other kitchen sink upgrades, such as the Insta-Hot hot water dispenser, but still it is most known for its garbage disposals. Hammes’ company was purchased by Emerson Electric in 1968 and most recently InSinkErator was acquired by Whirlpool Corporation in 2022.

While it is widely accepted that Hammes invented the first garbage disposal, there is some debate over which company offered them for sale first. In 1935, the same year that Hammes’ patent was issued, General Electric began selling a garbage disposal called the Disposall.

In the early days, there were regulations against food garbage being flushed into the sewage systems in U.S. cities. New York City even banned garbage disposals for fear of the ground up food waste doing harm to the sewers. After months-long studies and investigation, bans were lifted and it was generally acknowledged that garbage disposals did not harm the sewer systems.

In fact, disposing of food waste through the sewer systems is more environmentally friendly than sending it to a landfill or to a burning facility. Food waste in landfills produces greenhouse gases as it decomposes, and it takes a considerable amount of energy to burn in facilities that incinerate garbage. Alternatively, wastewater plants can process organic garbage into useful products, like fertilizers. Wastewater plants can also capture the methane from food waste decomposition. Instead of letting methane, a greenhouse gas, be released into the atmosphere, captured methane can be reused as a source of energy.

InSinkErator continues to be the world’s leading, largest garbage disposal manufacturer. We have John Hammes to thank for the invention of this kitchen upgrade! If your kitchen is in need of a new InSinkErator garbage disposal, the plumbers at Air & Energy would be happy to install it for you. Air & Energy is a family-owned and operated company providing air conditioning, plumbing, electrical, and generator services to residents in Manatee County, FL for nearly 40 years.

If you’re interested in reading more about John Hammes and the early years of his In-Sink-Erator Manufacturing Company, we encourage you to check out this article on the Racine County Eye by journalist Paul Holley. It’s a great read!

Why Buy from a Trane Comfort Specialist

If you’re in the market for a new air conditioning system, you may already have a good idea of what brand or manufacturer you prefer. Here at Air & Energy, we partner with Trane because we think their A/C units are the best choice available! But, your experience...
Read More

What causes cloudy water? When you turn on your kitchen faucet, you probably expect delicious, crystal clear water to come flowing out. Unfortunately, sometimes tap water can look milky or cloudy. Don’t worry – there are solutions! And, since every good solution...
Read More

If you’re looking to upgrade or replace outlets in your home, you may be surprised to find that there are several different types of electrical outlets available. But, don’t let the options overwhelm you! Each type of electrical outlet has its own special use case to...
Read More

Not every A/C problem can be tackled with a quick fix. But, every now and then there is a simple solution to common air conditioning problems. We’ll share three common reasons your thermostat is blank. Plus, we'll share some simple solutions you can do yourself!...
Read More

Will a Frozen A/C Fix Itself?

It’s easy to joke that an air conditioning unit able to encase itself in ice during a Florida summer should have no problem keeping things cold. Unfortunately, being stuck in the sweltering heat and humidity even for a day is no laughing matter. We’ll go over how to tell if your A/C is frozen and what to do if it freezes.